CFNM stands for “Clothed Female Nude Male.” This term or fetish is often paired up with female domination and teasing. Other times it’s just a group of CFNM babes jerking off a dude, fucking, or having fun with strippers in a club.

French Kiss. We all know it, most of us love it and escorts tend to offer it. It often comes with GFE or BFE.

It stands for Boyfriend or Girlfriend Experience. You get more personal and intimate experience with a guy or girl that is like being in a relationship. Each escort can be a bit different, but expect french kissing, cuddling, and hugging, as well as sharing meals, and having conversations. To add, you’ll a better chance of coming across someone who isn’t a clock watcher.

This widespread term is used when an escort appears to be rushing, not enjoying the job, or waiting for the time to run out because they don’t seem to enjoy their work.

This stands for a certified massage therapist or, in other words, a professional masseuse. Escorts that offer this service will not only give a killer massage but also give you a happy ending and fuck your brains out if you want.

If you like a woman who pays attention to details, ask for BLS or ball licking and sucking. After all, your cock isn’t just about the tip.

This term lets you know that you can bang a chick’s butt. Combine it with ATM and CIM, to get the ultimate experience. Luckily, there’s usually no shortage of A-level escorts.

Now you’re ready to go out or go online and book yourself a hot girl using these escort sex terms. Tell us if we missed something important and leave your comments below.

This can either be an acronym for bondage and domination or bondage and discipline, depending on what gets your motor running. BD is specific and involves no infliction of pain during bondage and humiliation role-play.

Bondage is for those that are aroused by being restrained or restraining others. You can also try out solo or self-bondage. Tools and toys of this trade include ropes, collars, tape, handcuffs, and so on.

It is a subset of bondage play where special attention is given to a girl’s breasts. They can be wrapped to make them flat or squeezed and made to bulge with rope, sometimes until they turn red or purple. Not for the faint of heart.

Another interesting one, clamping is performed with clips, clamps, clothespins, pegs, or anything that can squeeze and pinch someone’s nipples or skin. Make sure they have natural tits. The combination of being pinched and expecting the implement removed create sexual pleasure.

Also known as Japanese bondage or shibari, this play uses ropes to subdue a submissive partner. However, you need create complex or intricate patterns for this to clasify as Kinbaku.

No need to go in-depth here. A master is a name used for a dominant male partner.

That is a device that you can wear, and which prevents you or anyone from touching and using your private parts. Again, the dominant person, male or female, has the key while the sub wears the belt.

Short for cock and ball torture, CBT focuses on male genitals for the goal of humiliation, masochism, or sadism. During CBT, a dominant might spank, flog, slap, tickle, or pinch the cock and balls.

A sub wears a collar which is a symbol of ownership. Collars usually have metal rings so a leash can be used. Hello, puppy play!

If your sub misbehaves and acts up immaturely, you’ve got a brat on your hands. Punishing them is a special treat.

A pain slut doesn’t have to be submissive, but she must love experiencing lots of pain and aren’t always submissive.

Simply put, this refers to role-playing where one participant or more acts as an animal. The most common animal play is puppy play and pony play. The first can involve bowl training, leashes, barking, etc., while for the latter a bridle might be used, or the sub might get straddled like a horse.

Age play is mostly known as daddy/daughter and mommy/baby play. This role-playing is based on nurturing between a sub and dominant partner and doesn’t have to have any incestuous connotations.

When you talk gunplay, it describes sexual arousal from using water, toy, or replica guns in different ways.

A domina or master uses impact play for arousal excitement, humiliation, or punishment of a sub. The tools of this trade are whips, paddles, floggers, riding crops, canes, whips, and so on.

Bastinado usually happens during impact play and refers to the whipping or canning of a submissive’s s feet, often while he or she is in bondage and restrained.

Paddling also belongs to impact play. The targets for paddling are the butt, breasts, stomach, thighs, and even private parts.

Flogging is carried out with a flogger device, most often a simple or a multi-tailed whip, as well as a rod.

It sounds nasty, but knife play is about using knifepoint or edge to arouse, excite, or provoke fear in a partner without cutting into the skin. This kind of play requires a trusting relationship.

Eroticism and submission intertwine in foot worship. For example, the sub might have to clean, lick, suck or massage a master or femdom’s feet during foot worship.

Mummification might make you chuckle a bit, but it’s the act of restraining a submissive partner by wrapping them up like a mummy and leaving only their head or breathing holes exposed. You can use cling film for this, various plastic, cloth, bandages, etc. Those who indulge in this type of play get excited by being helpless and bound. 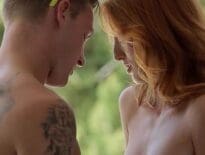